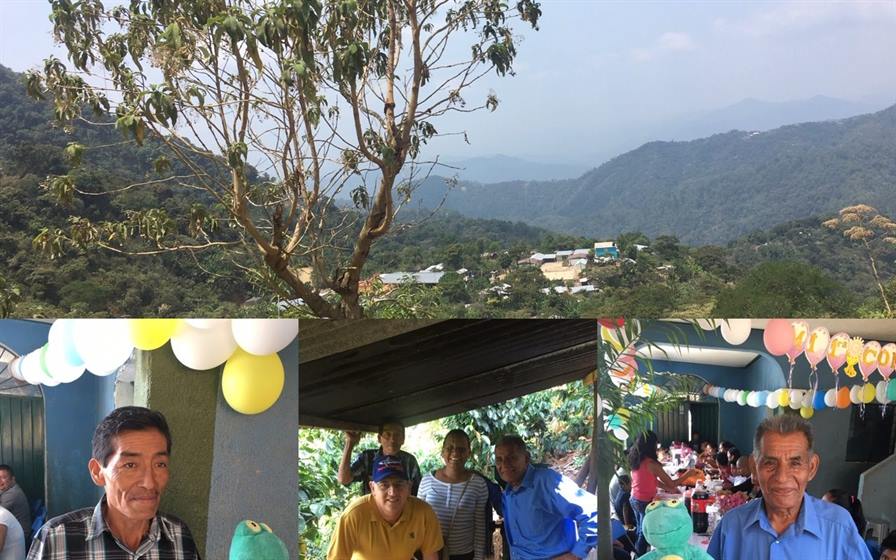 We left at 7 in the morning from Puerto Escondido to visit two producers from what Caravela calls the Los Naranjos (in Mexico, not Colombia) production area. It appears that these producers are based in the town San Pedro El Alto in Oaxaca.

The drive was just over 3 hours, even though only 130kms was travelled from Puerto Escondido. The first 40 km were on route 200, which connects this part of Mexico to the famous Pan American highway. The speed limit varies between 80-90 on the parts that have no built-up areas, but those are quite common. Before each built-up area of any size – say two stalls on the side of the road, there are dramatic speed bumps. Called Reductor (which is a smaller bump) or Tope (which you need to almost stop at) they bring every vehicle to a near halt.

After 70kms, that took us around 40 minutes; we left the highway onto route 175. We still had 140kms to go, which took over two hours more. All along these roads, you see various trades: mechanics, food stalls, wood sellers, hand made furniture stalls, general dealers and the occasional shrine to María. The condition of the roads varies from good to “I think that is a road”.

On the way, we stopped at a Comida Economica. These are all along the roads on the way. Usually a few (mainly women) staff in an open stall with a wood burning fire that is heating a nearly flat pan. The fire is used for heating the tacos and burritos. We had a local traditional breakfast, which was cheese in a corn burrito with salsa. I also tried a thicker style taco with salsa and cheese. While the food is spicy, it is not madly hot, and it is delightful.

The roads can be very winding, sometimes almost doing a 360. As a result, a snake of cars can form behind a slower car. Roads are well used but are not that busy with very few places to overtake. But everyone takes this in their stride.

We went off the tar road after almost one and a half hours — the next part of the journey was on narrow dust road for 20km.  Here average speed is 15km/h. On the way went through a medium size village, before we got to San Pedro El Alto, the home village of the Los Naranjos producers we had come to see: Moises Hermandez, and Andreas Nolasco.

We arrived in the village where we were met by Lourdes Aparicio Rivas, who is the local area PECA person. She works directly with the local producers. Lourdes took us to Moises’ house and explained that everyone was at church for Moises’ granddaughter’s first communion. We took a walk down to the church.

On the way there I was told that Moises is a very important producer (VIP), being the head of the Los Naranjos producers community. The community is around 160 large and Moises represents the area on the Guatemalan producer’s forum. The Forum is involved in upliftment of the Central American coffees.

After the communion we met Moises and Andreas. They then offered to show us the closest of their farms, which was Andreas’ farm.

We left the village and took a walk to Esperanza, which meant following a narrow track into the forest and down into the coffee farm. The gentle walk took about 20 minutes.

Finca El Encanto is Moises’ farm. The farm is around 1500 masl. The farm is two acres and produces between 6 and 12 bags, depending on the seasonal variance and success in fighting Broca and Roya. Estimate Latitude for both farms: 15°59′

Finca Esperanza is Andreas’ farm. The farm is lower at around 1300masl. A smaller than average farm of half an acre. He produced three bags last year.

They grow several cultivars including Costa Rica, Palma (a Mexican cultivar found only in Mexico, that is related to Typica), Sarchimor, Typica, Bourbon. They have planted all these cultivars because they are currently testing production and resistance of each cultivar at different heights. Production quantity is a higher priority than quality with these experiments, but they are also looking at cup quality.

The harvest is between October and Feb. Andreas has to hire around four pickers during the harvest to work the farm. Coffee cherries are pre-floated for 30 minutes before processing. Due to the language barrier, it was hard to determine where the drying is done and how. It was assumed that it was done in the village on raised beds. We did see some naturals in the village on patios, but they mainly do washed coffees. In Colombia, we saw that floaters are often processed using the dry method for local consumption, while raised driers used for the coffee they hoped to sell. While we cannot confirm this to be the case here, it does seem to be likely.

Video of farm and area

After visiting Esperanza (we did not visit Moises’s farm it was another 45 mins walk, and his granddaughter was having her first communion, so we were invited back to join in for lunch). Here we were offered a type of soup or a molé.  I choose the molé since I had never had one. It reminded me a little of a red Indian curry. You dipped your corn burrito into the sauce and broke off chunks of chicken to pick up with the burrito.

Once we were finished our meal and left our places, other guests took our place and were offered the same choice. It seemed as people arrived, they sat and waited their turn to eat — a smart idea since then you can feed many more than you have a table for.

On our way to Oaxaca City

Once we said our goodbyes to the two Los Naranjos producers, we headed for Oaxaca City. We had to travel a very winding road for around 50 kms. In that time we climbed from 1400 masl to 2600 masl. We then joined the tar road again, which for most of the way was much better than before.

Once we came out of the mountains, we hit the Oaxaca planes. These planes appeared very dry, almost arid. When I asked about this, I was told that this was what the region was like during the dry season and that the rain comes in June and July.

The last part of the drive was on a national route (we still had the Reductor and Tope humps), so we nailed the last 120 odd kilometres quickly. Edy was a star driver.

After visiting Finca Las Nieves the previous day, which is a farm on a macro scale, these producers have tiny farms. We are however used to this from our Colombian visits. This is more common in most of Mexico too. Most producers have an average of 1.5 acres. A finca of that size makes it hard to make a living, especially if most of the production is not able to demand the prices a high-quality coffee can. Also, a small outbreak of Roya (coffee rust) or Broca (bora beetle) can wipe out all profit.

Both Andreas and Moises supplement their income selling complimentary crops of bananas (the shade trees on the farm, along with Inga trees). They also told me they have maize farms in the valley, but once again, I am not sure if this was a bad translation or that the famers said they buy maize from the valley. Both Moises and Andreas were in their late 60s, and it appears there was a lake of interest from the younger generation around the coffee. Many voices within the industry have cited this as a cause for concern, the lack of interest for a new generation to take over the farms is a dominant discussion point, behind only climate change.

Unless coffee prices increase, this will be the death of coffee. Once this generation of farmers passes on, who will take over? Will, there be a consolidation of these farms depending on which of the families decide to sell their farms, and perhaps move on? Unlike in Colombia, which appears to have sustainability of the farm and quality as core principles, I did not get the impression this was a driving force here.

If the farmer is battling to feed him or herself and their family, how can this be sustainable? While the human contact of visiting these small producers is fantastic, I found I was pondering the lack of future of these farms and farmers. The only choices for theses farmers are consolidation or to rely on the few quality driven coffee buyers that are prepared to pay a reasonable price for small lot quality coffees.