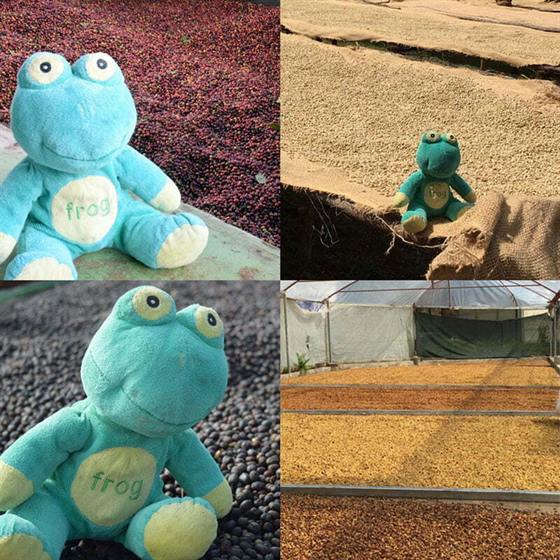 A consolidated view of coffee processing methods. These were originally posted in our newsletters.

The wet processing method of extracting the seed (bean) from the coffee cherry is a modern coffee processing method. Initially, it started in coffee-growing areas near springs, where water was abundant. However, the clean-tasting coffee it produced meant that its popularity spread. Many types of wet processes are implemented today, but we will cover the common elements.

While harvesting should ideally only select ripe coffee cherries, a second quality check is typically required. There are two approaches here. Either a group of harvested coffee cherries are covered in water, and only those that sink are de-pulped. Or an alternative is that cherries are de-pulped with water as part of the process; the remaining pulp and pips that sink are then separated from those that float.

Either way, the floaters are considered unripe or damaged (by insects, fungus or disease), and those that sink are of higher quality. In some countries (like Colombia), floaters will either be dry-processed or used for local or commercial consumption.

Depending on the country, both these qualities may be then covered in water, to ferment sans air (or anaerobically).  Once the remaining mucilage around the pip, starts to separate from the pip, the resultant combination is rewashed. This can either occur in long washing channels (typically African coffees are processed like this), or in a separate washing container.

A resulting “washed” coffee, is then dried until a desired internal moisture percentage occurs (this depends on the country too).

Washed coffees are known for their brightness and cleanness in the cup.

The natural process is most likely the oldest processing method, when it comes to coffee. During the process, the complete coffee cherry or fruit is used. Once the cherries are picked, they are sorted using colour (if quality is a driver). For cultivars that are red, only red cherries are used, yellow only yellow and orange only orange.

At this point, one of three things happens. Ripe cherries are spread out:

After this, the methodology used effects the final taste. If cherries are left to dry as is, they will start fermenting. Coffee cherries at the bottom of a pile ferment more than those at the top. If a farmer, producer or processor is meticulous, they will ensure cherries are moved or tossed regularly to prevent fermentation from becoming a dominant flavour or destroying the final coffee.

The best naturals are tossed at least once every two hours, allowing uniform dryness throughout the cherry, without the natural fermentation affecting the full taste in the cup.

It is however preferable for the coffee to be left to dry naturally and when it reaches an internal moisture level between 10 and 12%, then removed from the dying bed or patio.

A well processed natural will be sweet and juicy, like the Gishubi (or Gitwe) we offer, or the Yemeni coffee we offered as part of the secret offering. If a natural is not properly processed it becomes dusty or funky in taste.

There is sometimes debate about whether or not natural coffees can produce a quality and clean cup, we believe you should be the judge.

Natural and wet processing are the most typical coffee processing methods. Natural processing allows natural drying of coffee cherries. If done correctly, it uses the natural fermentation of the complete coffee cherry to expose the pip (or bean). Washed removes the fruit, then typically ferments the remaining coffee pulp away from the pip underwater.

The Honey process can also be called pulp-natural or semi-natural. Honey processed coffee is typically associated with smaller lots, with coffee being dried generally in the sun. Pulp-natural coffees are large commercial lots and often dried initially in the sun, after which drying is often completed in an automated drier.

Honey-processing of coffee started off as a way to dry coffees quicker. By removing the skin from the fruit pulp would dry sooner. Getting coffee to market quicker was the objective. Honey-processed coffees were limited initially to water-scarce areas (at least during harvest). The fact that these coffees then had interesting cup-quality and flavour notes promoted the method to other areas.

Honey processed coffees use depulping machines (or demucilaging machines) that are calibrated to remove the skin from the fruit, as well as some of the fruit pulp (mucilage).

It has become common that there are difference names associated to honeys.:

As you can see there is no clear definition. What is important is that when these descriptions are presented, to be aware it is linked to the final taste.

A quick note on fruit pulp: In our experience at origin, we have found the more fruit pulp on the cherry, the tastier the final coffee in the cup. A healthier fruit tree produces more. Since fruit is essentially food to attract animals to free their children from the fruit, should the fruit fall to the ground, then more fruit equals more compost material for the baby seed. A healthier mother plant produces a healthier fruit and baby. This has a scientific base since more fruit means more sucrose and fatty acids in the fruit, an important consideration when factoring in how micro yeasts act on the fruit pulp.

Back to honey processing. Once the determined amount of fruit pulp is removed, the resulting sticky (like honey) fruit is laid out either on a patio or, preferably, raised beds. For well-processed honeys, fermenting fruit pulp is then tossed regularly.

Once the desired moisture level of the seed is achieved (10-12%) the coffee seed is removed from its drying table (or patio). The rest of the processing then occurs as with naturals.

Wet-hulling (also called Gilling Basah) was probably first invented by the Dutch after first acquiring the coffee plant via India and colonising Indonesia in the 1700s. The first major European coffee plantations were established in and around Java (hence the link between coffee and java).

Before we go further, we need to explain what hulling (or milling) is. Hulling uses several methods of removing anything that is not the pip of the plants produce. In rice, spelt, wheat and other grains it is used to remove the husk, generally by either thrashing or rubbing. For coffee, the protective layer is customarily called the parchment, and this needs to be removed to assist in roasting the coffee. There is still a layer underneath that is called the silver skin, that I tightly wrapped around the pip, and usually only is removed by roasting. Typically the silver skin is shed, as the coffee bean expands during the roasting process.

The difference between a coffee that is wet-hulled (and the methods we have already covered in the previously) is linked to the fact that when the coffee is hulled the moisture level of the pip is around 30-40% rather than the previous methods we have covered, where it is about 10-12%.

Wet-hulling is mainly used in Indonesian countries, and it is believed to be linked to the dominant spicy notes found in coffees from this region. Indonesian coffees that now use the methods we have already covered are available. The result is cleaner and sweeter coffee (in fact our Indonesian Kerinci is one of them). However, we have still found the spicy notes to prevail, even if not as a primary flavour.

We have collated several videos on processing which we have published into a single post you can access via our website. The post is called Videos on coffee processing. Here we summarise the processes we have covered, with some region specifics, too.